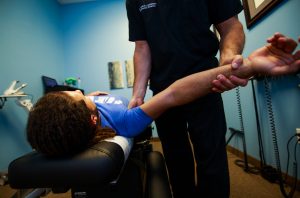 Every muscle in the human body works through a combination of expanding and contracting alongside nerves, ligaments, and tendons. Ligaments connect together two bones at a joint, while tendons connect muscles to bones. Together these elements make up the system that provides movement, strength, speed and flexibility in your body. Musculoskeletal disorders occur when a part of this system doesn’t function properly. Sometimes they occur because a muscle is too tight. Often they occur because a muscle has been stretched too far, and other times it is because tissues get stuck together or don’t properly slide on top of each other. Often musculoskeletal disorders cause muscles to put too much pressure on a particular nerve causing pain and weakness.

When musculoskeletal disorders occur, scar tissue is formed. Scar tissue can be formed through performing a motion with a small amplitude or range repeatedly, or when a larger motion is completed with a great deal of force. Once scar tissue is formed, muscles and tendons become tighter resulting in a cycle of re-injury. Active Release and IASTM interrupts that cycle with an evidence based form of instrument- assisted applied manual therapy to quickly and effectively break down scar tissue and fascial restrictions, as well as maintain optimal range of motion.